A Potluck So Good, It’s Scary: The Rise of Souptacular

When you don’t have a lot of money, you use stuff that’s just laying around to build a solid company culture—like monkey guts, bat brains and bird poop stew.

That’s what Souptacular is made of.

Our annual Halloween event, Souptacular, started when Firespring was just a start-up with very little money for big team events. So, we figured why not a potluck? And since it’s fall, we decided to major in soups—and, of course, to give them fitting Halloween-themed names. Cheesy potato soup became “pus and chunks.” And because we’re so competitive, the event had to be a contest.

You can learn a whole lot about people from a potluck—not only whose house you want a dinner invitation to, but also what makes people tick. And what does a little friendly competition among coworkers do? It brings everyone together, gives the workplace a family atmosphere and fosters camaraderie. 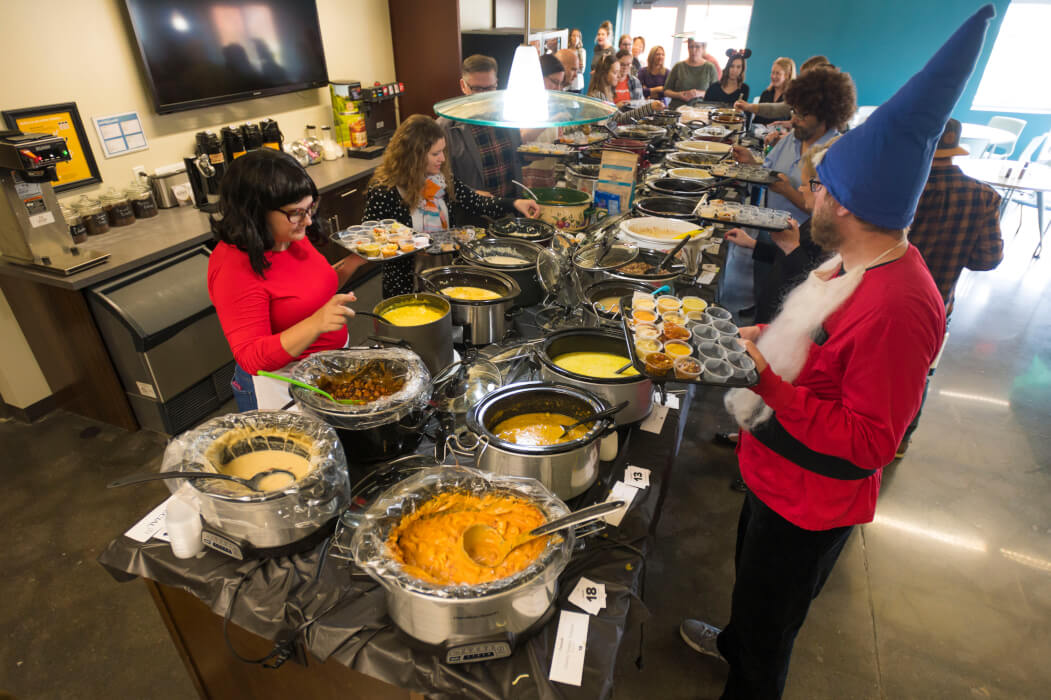 Souptacular has been a longstanding tradition for us, even though we’ve grown over the years and now have a budget for bigger things. That just goes to show that creating a dynamic, exciting, fun-loving company culture isn’t about expensive perks and flashy toys. It’s about celebrating your work family and embracing the values you share. It’s about making the office a fun place to be—and isn’t it so much easier to hit your alarm in the morning when that’s what you’re waking up to?

On a personal note, I’m the one who ends up making a vegetarian soup with super fresh, delicious ingredients. But it always looks like barf. So, after doubling or tripling the recipe (as I typically do), I usually leave with a full crockpot, while those who just stir together a block of Velveeta with cream cheese take home the Golden Crockpot (the coveted Souptacular grand prize). That’s the price I pay for trying to be kind to my coworkers’ hearts and waistlines.

If you ever get an invite to our beloved and much-anticipated Souptacular, here’s my best advice: Wear stretchy pants; there are 30-some soups to sample. Also, make sure you know which soups the folks at your table made so you don’t say something you’ll regret. (Kidding. And yet, not really.)

Some other thoughts from Firespringers who’ve been around the Souptacular block a time or two:

“The eternal Firespring debate is does chili classify as a soup? And for that matter, is stew considered a soup? S’more soup IS a soup. In fact, I believe it won 3rd place during the 2012 competition. You can make anything a soup if it’s watery enough.” –Josh

“When making a soup, don’t go gourmet or fancy; they never win. Instead make a soup that is cheesy, creamy and definitely filled with calories; they always take the Golden Crockpot.” –Lindsay

“It seems that over the years the soups that ‘win’ are more like dips than something you could eat a whole bowl of. That makes sense when you’re tasting soups en masse in two-ounce cups. Go ahead; ignore your doctor, and don’t be shy on ingredients like bacon, cheese and sausage.” –Phil

As a two-time defender of the GCP, I’m going to have to correct this mudslinging. No Velveeta was ever used in the making of my winning soups (nor did they contain s’mores). —Shannon

“It’s awesome when people share what’s in the soups they make. As a vegetarian, I know I’m not going to be able to eat every soup, but I really appreciate that Firespring makes sure they’re already labeled vegetarian, vegan, gluten-free, contains peanuts, etc. so we’re more inclusive of all the dietary needs and preferences of our team.” –Julie

Do you want to work here because you have a great soup? Or other talents you’d like to share with Firespring? We might have something cooking on our careers page for you.

April 28, 2020 by Jay Wilkinson
BusinessImpact Strategy
Why Cutting Your Marketing Budget Is a Mistake

Why Cutting Your Marketing Budget Is a Mistake

April 7, 2020 by Angie Kubicek
BusinessSignage
What’s Your Sign? No Offense, but Maybe It Needs to be Updated

What’s Your Sign? No Offense, but Maybe It Needs to be Updated